So, out of curiosity, what goes through your mind when you see this picture? 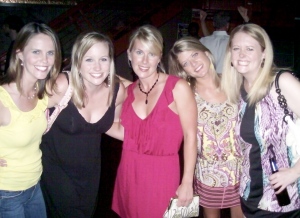 On the surface, I bet you would say 5 pretty girls who had dinner, drinks and went dancing to celebrate a 30th birthday.  And you would be correct.

But what do you think if I tell you this picture also illustrates the following:

Bet you weren’t expecting that.

Is this some sort of invisible illness support group?  Nope, although we did go to a martini bar named Therapy.  I hope you’re appreciating that little nugget of irony like I did.

This is merely a cross section of life.  And I imagine that this would be fairly representative of all of us.  Just because you can’t see these illnesses on our faces or bodies doesn’t mean that they don’t exist.  In fact, I’d wager that because you can’t see them, it makes  existence harder for those who suffer from them because there is no sympathy or understanding because there is no cast or stitches.  Nothing visual to suggest anything is out of the norm.

On the flip side, because you can’t see these illnesses, you can hide them and only disclose them to people you feel comfortable with.

And it still lets you take great pictures with your friends in bars named Therapy.

Send me an email!