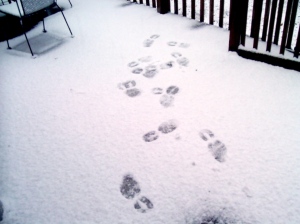 I live in South Carolina. When faced with winter weather, we shut down. I’ve actually seen idiots put chains on their tires for nothing more than a deep freeze. And then you have all these rednecks who think “if Dale Jr can do it, so can I.” And they’re wrong. They can’t do it and they endanger all of us. Nothing made me smile more than an icy day a few years ago when some fool flew past me on an icy road, fish tailed slightly and almost hit me, scared me to death and then I passed him a few miles later- he was on the side of the road with a busted fender getting a ticket. I did the polite thing- smile and wave! Lately, I just stay home and wait it out. With the many orthopedic issues I have, I certainly don’t need to get in a wreck. Especially with a mullet wearing a shirt that says “Git Er Done.” I digress.

So we got 3 inches of snow last night. And I’ve had a very nice albeit unexpected day to myself. I’ve been really stressed and sore lately and it was a nice change of pace to be able to do nothing but lay on the couch and watch movies. And take a bubble bath. And watch my neighbors make snowmen and go sledding. And now I’m getting ready to take another bubble bath and then get in bed and (drum roll) watch more movies! In the midst of all of this, I’ve taken some time to regroup on some things with my RA that I will give you a quick rundown on.

Success: I’m now drinking decaf coffee only and have cut my sodas back to one or so a week. I only lost my temper once during the switch which is more aptly described as a miracle.

Fail: Methotrexate and my stomach. I’m still having a hard time eating- I’m really hungry but most things I want, my stomach doesn’t. And the only things it will let me have (plain pasta) are so fattening. I’m starting on probiotics effective immediately so hopefully this will help.  On the bright side, if they don’t work, I’m going to rock it this swimsuit season.

New Idea: I’m going to start keeping a symptom diary again. The reason for this is that a coworker who has fibromyalgia is greatly affected by the weather. Have you seen those National Geographic documentaries where dogs/cats/other wildlife seek shelter hours before a major storm? Yep, I’ve found the human counterpart. I don’t think I’m sensitive in that way but to be honest, I’ve never tracked it. So we shall see. Oh, how I would love to have special powers….

So, enjoy the snow pictures- I hope the pic of me sans makeup and recent shower isn’t too cringe inducing. ☺

Send me an email!